Having sold the most expensive yearling for a freshman sire at the 2020 Keeneland September Sales – the $775,000 Gun Runner – Sweet Shirley Mae colt – Breeze Easy was again represented by major offerings at the most recent September Sales.

Top Breeze Easy yearling this year was a gray or roan colt by Justify out of the stakes placed Rockport Harbor mare, Stayclassysandiego. Consigned by Baccarri Bloodstock, Agent, the colt is a three-quarters brother to the multiple graded stakes winning and grade one placed Scat Daddy filly, Pretty N Cool. The sale’s second highest-priced offering from the first crop of Triple Crown winner Justify, he realized $950,000 to the bid of Hideyuki Mori.

Session five saw Breeze Easy top the tables, as the homebred Curlin – Divine Elegance filly ended as the day’s top-priced yearling. Consigned by Eaton Sales as agent, the chestnut was knocked down to Donato Lanni, acting on behalf of Karl and Cathi Glassman. 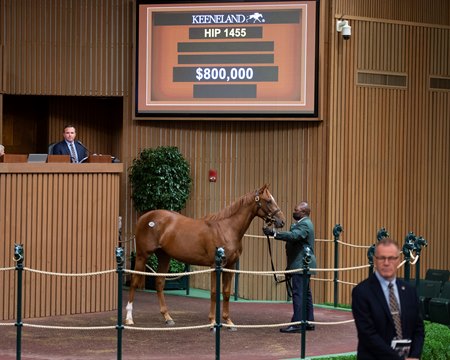 Purchased by Breeze Easy carrying her first foal, a Tapit filly, who is now two, Divine Elegance won three races, and took second in the Arlington Matron Stakes (G3) at Churchill Downs. The daughter of Uncle Mo is half-sister to the the dam of stakse winning and multiple grade one placed Standard Deviation (by Curlin, so also a three-quarters brother to the session-topping filly). Divine Elegance is out of the Schuylverille Stakes (G3) and Debutante Stakes (G3) victress, Classic Elegance, herself a half-sister to stakes winner Contributing, and to the dam of Kentucky Oaks (G1) heroine, Believe You Can. Divine Elegance is also dam of an Into Mischief weanling filly, and is in foal to Gun Runner.