Hip 214 is a filly by Into Mischief – Divine Elegance by Uncle Mo. Record-breaking three-time Leading Sire, Into Mischief heads the list again in 2022, with no less that 20 individual stakes winners, 13 graded, headed by the sensational Life Is Good. The dam, Divine Elegance, won three times and took third in the Matron Stakes (G3). A daughter of Uncle Mo, she is a half-sister to the dam of stakes winning and grade one placed Standard Deviation. She’s bred on the cross with Indian Charlie line mares that has provided two of Into Mischief’s fastest daughter, graded one winner Dayoutoftheoffice and multiple graded stakes winner Frank’s Rockette

There is no hotter stallion at the moment than Gun Runner who already has 12 first crop stakes winners, eight graded, including Champion Two-Year-Old Filly Echo Zulu, and grade one winners Cyberknife, Gunite, Early Voting and Taiba. Hip 294, a Gun Runner filly out of J. Quirk by Unbridled is half-sister to the Remington Park Oaks (G3) victress, Lady Mystify. The second dam is by Storm Cat out of a sister to Tiznow, and she is bred on the tremendous Candy Ride/Unbridled’s Song cross.

Hip 312 is another Into Mischief. This one is the first foal of Breeze Easy star, Late Night Pow Wow. Late Night Pow Wow had the remarkable record of 12 wins in 15 starts, including the Charles Town Oaks (G3) and the Barbara Fritichie Stakes (G3) in which she defeated multiple grade one winner Spiced Perfection. Late Night Pow Wow is also a sister to another star in Muad’dib, winner of 10 of 11 starts, and second in the Charles Town Classic (G2). This filly is bred on the tremendously successful Into Mischief/Unbridled cross which already has more than 20 stakes winners, including Kentucky Derby (G1) winner Mandaloun, and Champion Sprint Mare and Three-Year-Old Filly Covfefe.

Hip 342 is also out of a standout runner, being a colt by Quality Road – sire of such as City of Light, Corniche, Abel Tasman, Caledonia Road, Bellafina and Dunbar Road – out of the Into Mischief mare, Miss Sunset. The dam is a winner of nine stakes events, and nearly $900,000, including the Raven Run Stakes (G2), and she was beaten just inches in the Madison Stakes (G1).

Selcourt was one of the best racemares of her time on the West Coast, winning the Santa Monica Stakes (G2), Las Flores Stakes (G3) and Kalookan Queen Stakes. She his represented here by Hip 428 her first foal, a colt by Tapit, three-time Champion Sire, with such sons as Flightline, Essential Quality, Consitution and Tonalist to represent him. This colt is bred on a version the same Tapit/Tiznow cross as classic winner Tiz The Law, and 2022 grade two winner We The People.

Another graded stakes winner with her first foal in the Breeze Easy draft is Sue’s Fortune, who took the Adirondack Stakes (G2) at Saratoga. She is dam of Hip 1218 a colt by the record-breaking sire, Uncle Mo, who is responsible for such as 2022 classic winner Mo Donegal, Nyquist, Mo Forza, Bast, Golden Pal, Dream Tree, Yaupon, Mo Town, Unbridled Mo and Outwork. This colt is bred on the Uncle Mo/A.P. Indy cross that has produced nine stakes winners, including grade one winners Mo Donegal and Mo Town.

Breeze Easy have a pair by Justify at Keeneland September. Hip 1224 is out of Sweetgrass, a young Street Sense daughter who placed in five graded events, including when second in the Indiana Oaks (G2). She is from the Courtly Dee family that has also supplied such as Althea, Arch, Covfefe, Green Desert, Bayern and Acoma.

The other Justify is Hip 1864 a colt who is the first foal of Jessica Krupnick. Winner of the Dashing Beauty Stakes, and a very close second in the Ontario Fashion Stakes (G2), Jessica Krupnick is by Uncle Mo, out of a half-sister to group and grade one winners Eskendereya and Balmont. The family goes tail-female to Almahmoud granddam of Northern Dancer and Halo, and Jessica Krupnick’s fourth dam is 3×3 to that great matron.

Hip 1597 is out of Shoppers Return, also the dam of Breeze Easy sprint star, Imprimis, the winner of six black-type events, including the ShakertownStakes (G2) and Runhappy Turf Sprint (G3). Shoppers Return is half-sister to stakes winner Fifth Avenue, and to the dam of stakes winning and multiple grade one placed Shoplifted. Shoppers Return is also from the immediate family of grade one winner Trappe Shot and graded winners Trappe Shot and Tin Type Gal, all by Pulpit or his son Tapit, and her foal here is by Tapit’s brilliant son, Frosted.

Another Breeze Easy Frosted from a family that has excelled with Tapit is Hip 3340. This is the first foral of American Model, a half-sister to the Test Stakes (G1) and Humana Distaff Stakes (G1) scorer American Gal, and to stakes winning and graded placed Americanize, both by sons of Tapit. This is also the family of grade one winners Reynaldothewizard and Seventh Street, and grade two winning and grade one placed Lake Avenue, another by Tapit.

The brilliant City of Light was a sales sensation with his first crop yearlings in 2021, and he is already a freshman stakes sire in 2022. Hip 1918 is a City of Light out of the young stakes placed Medaglia d’Oro mare, Mia d’Oro. She is a half-sister to Weemissfrankie, a grade one winner twice at two, and to the dams of Champion Canadian Two-Year-Old Colt, God of Love, and stakes winners Muskoka Wonder and Piece of My Heart.

Cairo Prince is sire of such talented fillies as grade two scorers Royal Charlotte, Kiss Today Goodbye, and grade three winner Cairo Memories. Hip 2409 is a Cairo Prince filly, the first foal of the Into Mischief mare,Sail On. A sister to the promising 2022 allowance winner, Color Me Flying, Sail On is out of a half-sister multiple graded winner Teresa Z. The next dam, stakes winner With Flying Colors is out of My Flag from the Personal Ensign family of Storm Flag Flying, Miner’s Mark and Parading.

The prolific Speightstown/Medaglia d’Oro cross has provided seven stakes winners, five graded, including grade one winners Olympiad, Rock Fall and Competitionofideas. Hip 2515 is a Speightstown filly out of the graded stakes winning Yahilwa, a Medaglia d’Oro, daughter who won the Sixty Sails Handicap (G3), and placed in six other graded stakes, including when second in the Clement L. Hirsch Stakes (G1) and third in the Spinster Stakes (G1).

Finally, we have a daughter of Union Rags, sire of such daughters as the grade one winning Paradise Woods, Union Strike and Dancing Rags. Hip 2703 is a Union Rags filly out of Lady Sabelia, an outstanding sprinter who won eight black-type races, including Barbara Fritchie Handicap (G2), and recorded a 101 Beyer Speedfigure. 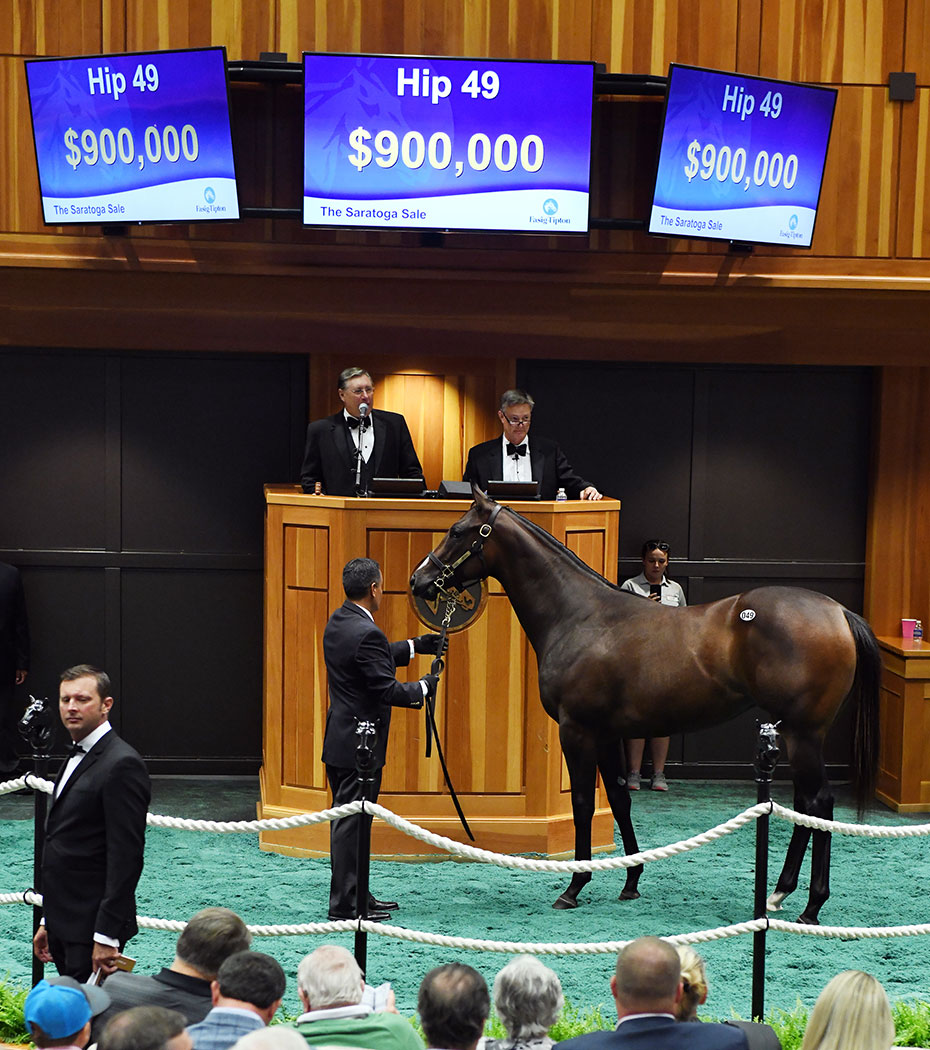 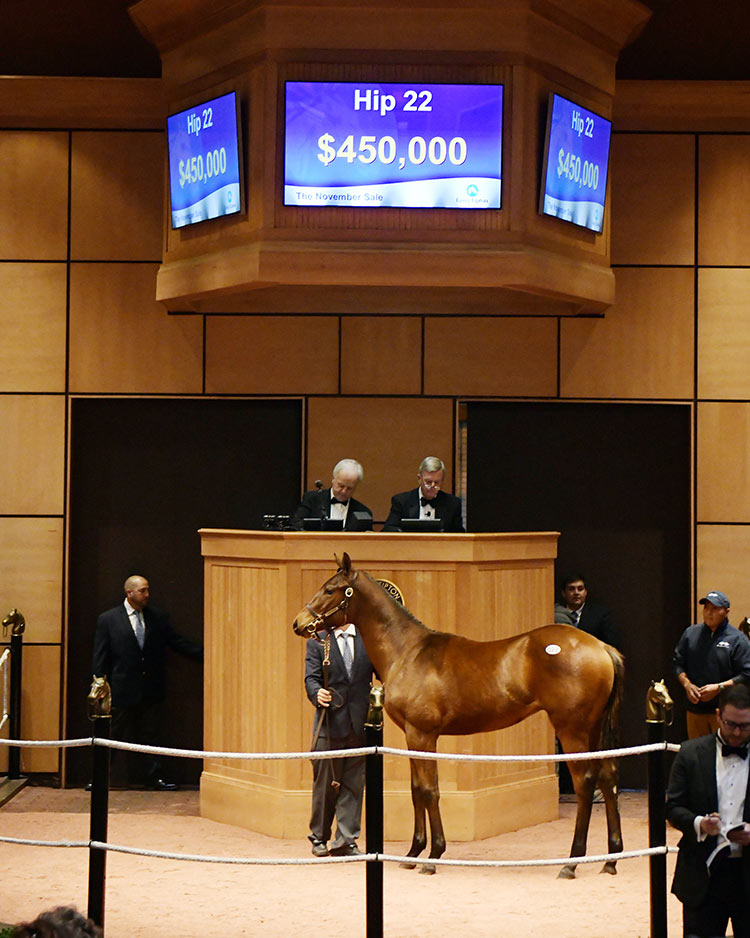 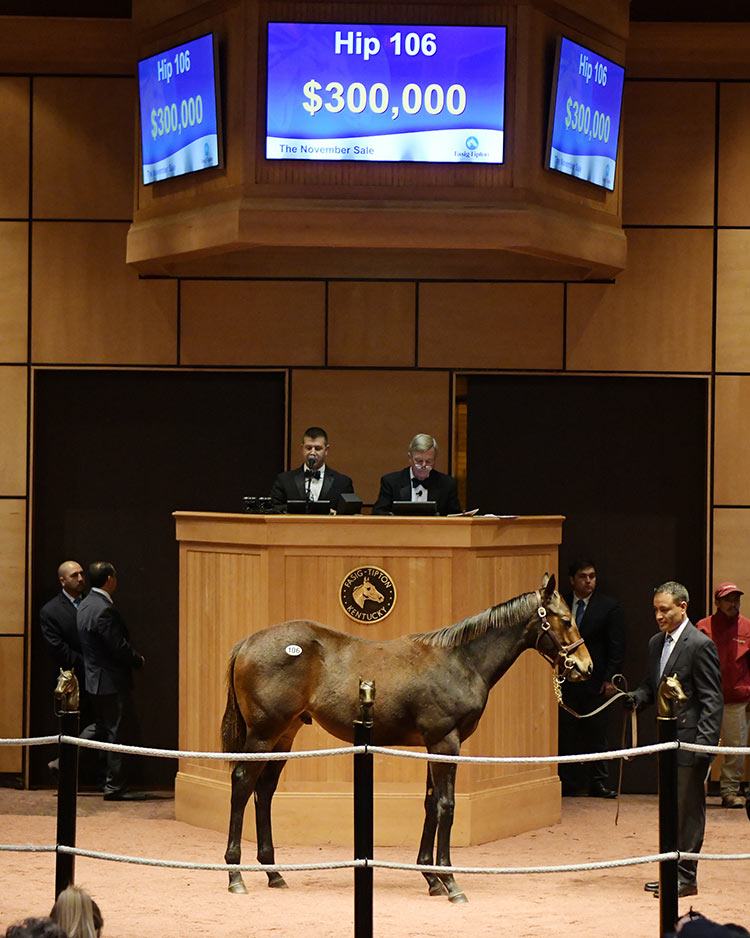